Retailers can receive a free sample pack of cards by sharing their favorite America card testimonial story! Check out the lastest cards and scroll down to fill out our form (valid for retailers in the USA and Canada until Feb 15, 2021). 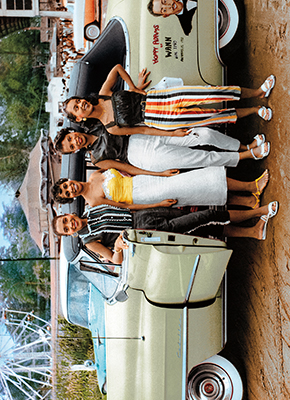 Bandstand on the Beach

Four young women with captivating smiles pose in front of a Cadillac at Carr’s Beach. The dapper gentleman whose likeness is hand-painted above the rear wheel is DJ Hoppy Adams, whose radio show on WANN broadcast on the AM dial from Annapolis to Maryland’s Eastern Shore, Delaware, northern and central Virginia, and the DC-Baltimore area. Every Sunday afternoon, thousands would flock to The Pavilion for “Bandstand on the Beach,” where Adams played soul and R&B hits from some of the biggest stars of the day. Along with rides, food, and pageants, musical legends passing through town would perform live, including Billie Holiday, Chuck Berry, and James Brown. 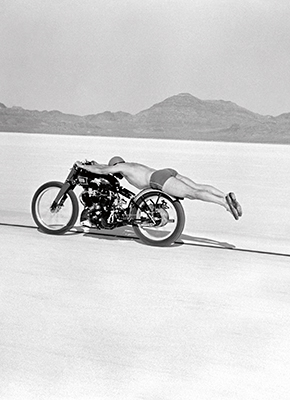 In swim trunks, sand shoes, and a swim cap, motorcycle racer Roland “Rollie” Free roars across the Bonneville Salt Flats at a record-breaking 150.313 mph. The hard, flat surface of the Salt Flats has been attracting attempts at various land-speed records since the 1930s: experimental motorcycles and cars fueled by gasoline, diesel, electric, and even rocket power all tried their luck on the Flats. To minimize wind resistance, Rollie Free stripped off his usual racing leathers and balanced flat on his customized 1948 Vincent HRD V-Twin Black Shadow. The result was a new American speed record for motorcycles, and arguably the most famous photo in motorcycle racing history 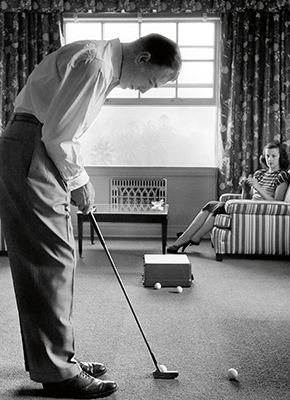 As you walk down the fairway of life, you must smell the roses, for you only get to play one round. —Ben Hogan As his wife Valerie knits in an armchair across the room, golf legend Ben Hogan practices his putt in a room at the Town House hotel. Known as “Bantam Ben” and “The Hawk,” Hogan is recognized as the greatest golfer of his era—renowned for his disciplined swing and ball-striking ability. His dedication to the game goes back to the age of 11, when he walked seven miles from his home to the Glen Garden Country Club in Fort Worth, Texas, to find work as a caddy. In an extraordinary professional career that ran from 1930 until 1971, during which he served in WWII as a lieutenant in the Army Air Corps, Hogan compiled 64 victories on the PGA Tour. After surviving a near-fatal auto accident in 1949, during which he threw himself across the front seat of the car to protect his wife, Hogan went on to win three of his four U.S. Open titles. Ben and Valerie Hogan were happily married for 62 years. 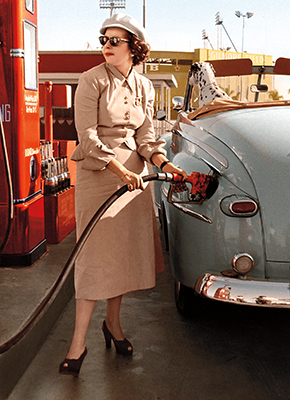 America’s first “filling station” was a single gas pump installed in 1905 on a curb in St. Louis. Prior to that, motorists purchased cans of gasoline from a hardware or general store to fuel their cars. The first “drive-in” service station opened in 1913 in Pittsburgh, and featured full-time attendants, a pagoda-style roof for shelter, and free air and water. By the 1950s, Americans were embracing automobile ownership at far greater numbers—so it was only a matter of time before self-service gas stations made their appearance. The epicenter of the revolution was the Los Angeles area, where “gas-a-terias” offered customers a 5-cent savings on every 26-cent gallon and the satisfaction of operating the ringing pumps with their very own hands. Moments after this stylish woman pulled up to the pump at the historic Gilmore Station, her Ford Super Deluxe convertible was gassed-up and back on the road. 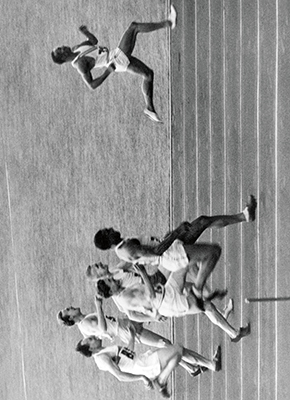 One chance is all you need. —Jesse Owens

To thunderous applause and a standing ovation, Jesse Owens rockets ahead of his competitors in the 100-meter sprint, winning his first of four Olympic gold medals for the United States at the 1936 Summer Olympics. Widely known as the greatest athlete in track and field history, James “Jesse” Owens was born a frail child to a sharecropping family in rural Alabama.

Not long after his family moved to Cleveland, nine-year-old Jesse discovered his life’s passion of running. He trained hard under the encouragement of his junior-high track coach, and at the 1933 National High School Championship, Owens matched the world record for the 100-yard dash. On May 25, 1935, Jesse Owens accomplished the unthinkable while competing for Ohio State University: he set world records in the 100-yard dash, the 220-yard dash, the 220-yard low hurdles, and the long jump, all in the same day. 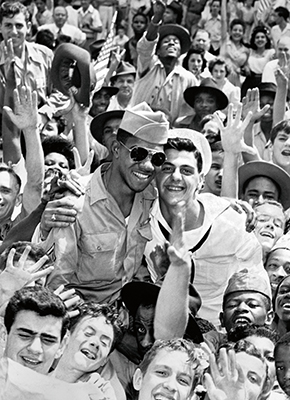 Celebrating an End to War

Spontaneous joy erupted across America when WWII finally came to an end. With the surrender of Japan on August 14, 1945 (V-J Day), just more than three months after the surrender of Germany, American soldiers and citizens from coast to coast came together in unparalleled numbers to honor those lost, but also to express an incomparable sense of relief and optimism for the future. For close to a week, in cities and towns across America, people crowded public spaces to proudly wave flags, stage impromptu parades, and set off fireworks—and strangers hugged in the streets.